Did you not know that I must be about My Father's business? Luke 2:49

Every day it is getting more difficult to labor without State numbers and licenses. Why do you need a license to work when you have already been commanded by God to work? It is your duty to work. The question is, "Who are you going to work for?" If you are a Godly man, why expend your talents and energies for the world system when you could be working for the glory of the Kingdom of Heaven?

Yes, you must work. But why suffer under the heavy burdens of State commerce when you can work under the light burdens of God's commerce. Come out of the false protection of the State and enter the true covering of Christ's government.

Imagine Jesus going down to city hall and getting a business license to heal the sick or preach the gospel. How ridiculous. His Father had already given Him all the authority He needed.

When Jesus was teaching in the temple, the officials asked, "By what authority doest thou these things? and who gave thee this authority?" (Matthew 21:23) They were obviously upset that Jesus was working outside of their system. Jesus had not been trained by them, nor approved by them, nor sent by them. His Father's great work required no license from men (John 5:43).

Today, Jesus Christ has been given all authority in heaven and in earth. He sends us to do His Father's work. Whatever we do, in word or deed, we do in the name of the Lord Jesus (Colossians 3:17). We need no other approval, for we have been commanded by the highest authority (Matthew 28:18-20).

Since the time of the Roman Empire, the license has been used by the Caesars of the world to establish their authority over a particular area. When we accept a license, we are accepting the sovereignty of the one who grants the license. An important principle of licensing is that the lesser authority never licenses the greater authority. Therefore, to ask permission from Caesar to labor, is to openly acknowledge that Caesar, not Jesus Christ, is lord over that particular sphere of our life. In other words, Caesar is the greater authority. Caesar is above Jesus Christ. Would you have Caesar as your king, not Jesus Christ?

Seekers of the Kingdom of Heaven throughout history have steadfastly refused to be licensed with the Caesars of their day. For example, John Bunyan, who wrote Pilgrim's Progress, spent 12 years in prison for refusing to get a preaching license. The Clerk admonished him saying, "You must submit to the laws of the land, and leave off those meetings which you were wont to have, for the statute law is directly against it; and I am sent to you by the justices to tell you that they do intend to prosecute the law against you if you submit not."

But Bunyan refused. Time after time he was brought before the magistrates and told that he could be set at liberty if he would just submit to their demands to get a license. But Bunyan stood his ground, even though it meant spending 12 years in prison. Bunyan knew he did not need permission from the State to preach. Jesus Christ had given him all the authority he needed.

Today's Caesar, the State, requires its people to have licenses for various professions such as plumber, electrician, contractor and even preacher. Cities often require a business license for storefronts. If you do not have these licenses, the State may attempt to stop you from laboring. Then you must decide: either bow down to their demands and receive their privileges, or confess that Jesus Christ is Lord and be willing to suffer for that conviction.

To help make the stand easier, Embassy of Heaven issues business licenses. Our position is that if they want a license, let's give them one. But it will come from the highest authority, not from them.

One of our citizens was being hounded by the City of Everett, Washington, to have a business license. They came in with the police and threatened to close down his shop. He filled out our simple request form for a business license and returned it to us. We put him on our system of records and sent him a Kingdom of Heaven business license. He called up the City and told them his license was hanging on the wall and invited them to come look at it. That was over two years ago and they have left him alone ever since.

The State has trained people to be wary of those who are not licensed. We need not have people distrust us. One of our citizens tells his clients, "Yes, my license is hanging on the wall. Feel free to examine it." If the client is curious enough to do so, his eyes may be opened.

Man Roofs for God, not by License 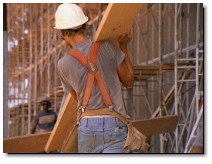 When you are working in God's commerce, be prepared for a battle. The State will be jealous. They want you to pay homage to them. If you are not licensed, they lose both revenue and control over you.

One of our citizens has built hundreds of roofs over the last few years, but not in the ordinary way. He has never obtained permission from the State before putting on a roof. The State has cited him a few times for not obtaining a permit, but he does not pay the fines. He operates under the sole authority of Almighty God. The State building inspectors have made many threats against him, but he continues to work. His intent is to be obedient to the One who sent him. He tells of one encounter with the building inspector:

"One day I was tearing off the roof of a 5,000 square foot building on the main street of a city. A crew of 14 was helping me.

"About 10:00 a.m. the building inspector's truck drives by, brakes suddenly, and backs up. The inspector jumps off the truck, points his finger up at the roof and yells to me, 'I want you on the ground, NOW! I want to talk to you.'

"I turn to the 14 people on the roof and say, 'Hold on, stop working. We're all climbing down the ladder to talk to this man.' I wanted the crew to listen to what was going on.

"The inspector introduces himself and hands me his card. 'You know you have to be licensed by the State of Oregon to do this roof.'

"I just stand there and don't answer him. He gets a little red faced and repeats his words. Then he says, 'I'm ordering you to cease and desist NOW.'

'Because God commanded me to do this roof and I can't obey both you and God. I'm sorry, but I have to go back to work.'

"The inspector is very upset. It's been a long time since he has been told, 'No.'

"Within 30 minutes, two police cars arrive. They start taking down license numbers, but when they come to my truck, they have nothing to write. It doesn't have State tags. While the police busy themselves with writing down licenses, I am up on the roof raising my hands, singing, shouting and praising God at the top of my lungs. There is no work getting done. Everyone is standing around watching. One of the officers shouts up to me, 'I'm coming up there to arrest you for disorderly conduct.'

"I ask, 'Is there a permit on this building?'

'No, there's no permit on this building.'

"He pauses and then says, 'I'm asking you the question again, Are you going to cease and desist?'

"I address the inspector and the officers: 'God asked me to do this roof and I intend to obey Him.' Without another word the building inspector and officers turn around and leave.

"I finished the job and I continue to roof for God, not by license from men."

We are to feed the hungry, clothe the naked, visit the sick, go to the prisoners, and preach the Kingdom of Heaven. Kingdom of Heaven business licenses open the door to opportunities. Several of our people wanted to visit prisoners, but were denied. They applied for and received a Kingdom of Heaven "clergy" license. Now they enjoy pastoral visits with inmates at jails and prisons. Others are repairmen, carpenters, handymen, carpet cleaners and plumbers. They use their wallet-size licenses to identify themselves to customers when they do a job.

Have you ever considered being a missionary to America? Think about it. Who do the harlot State churches send as missionaries around the world? They send doctors, plumbers, electricians, contractors - almost all professions to the mission field. These men and women work as foreigners, not becoming citizens of the country where they labor. As citizens of Heaven, we do the same thing in our native land. We are not local residents. We are ambassadors and missionaries of the Heavenly government. We do God's work, right here in America, without State numbers. We use the gifts God has given us to labor for His glory. If anyone asks by what authority we work, we show them our Kingdom of Heaven business license. We stand on the highest authority.

Therefore, my beloved brethren, be ye stedfast, unmovable, always abounding in the work of the Lord, forasmuch as ye know that your labour is not in vain in the Lord. 1 Corinthians 15:58